The issue of reconciliation is a deeply human issue that cannot be dealt with by legal means alone.
The desire for justice and reconciliation is contrasted with the challenges of taking responsibility and dealing with it.
Suffering, grief, and disappointment are juxtaposed with guilt and shame. The perpetrators or those responsible are entangled in their own thinking of advantage and do not manage either self-reflection or a change of perspective in this respect.
The fact that a perpetual unresolved conflict causes more damage in the end is covered by the own short-term striving for prosperity protection.
For victims, it is supportive to know the process and how to take an active role in this. It is helpful for those responsible to recognize and overcome their own entanglement in thought patterns.

Wars, exploitation and other past wrongs have left material and physical damage. The accompanying psychological injuries strain relationships over the next generations. Time does not heal these wounds but only suppresses them. There is a necessity for an active dealing with the past. Restoring dignity and justice requires acknowledgement, remorse, and compensation. For this compensation it is necessary to give something noticeable, which includes a letting go.
For those in charge, it’s a matter of moving from a fear-based attitude of refusal to one of empathetic responsibility.

In international conflicts, even if they are not subject to direct acts of war, there is an asymmetry of power that hinders the start of a constructive dialogue at eye level. Dealing with this fact is also the responsibility of the global community of states, as unresolved conflicts have a significant impact on the security situation and peace around the world. The costs arising from this are not included in the prosperity thinking of those who are accountable.

Overcoming a conflict or a strained coexistence after past wrongs begins with the acknowledgement of historical facts.

This is followed by the expression of regret and remorse, which is commonly understood as an apology.

The ensuing dialogue may result in a mutual agreement. The goal is a peaceful respectful coexistence up to real reconciliation as a basis for sustainable peace.

On the way to an agreement in this regard, the acknowledgement and apology process is crucial. 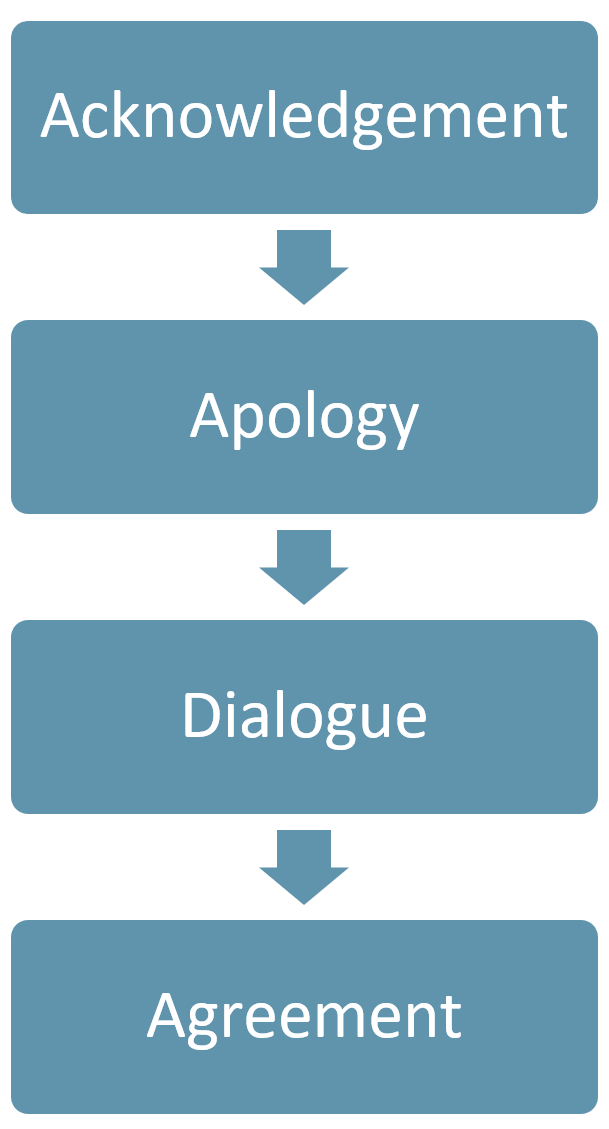 The acknowledgement is, among other things:

The subsequent apology as an expression of regret is a significant and symbolic step with diverse boundary conditions, especially with regard to its emotional meaning.

Acceptability to those affected is based on:

Learn more in the Working Paper:

Not only as a reminder for non-recurrence, but also as another ongoing process of reconciliation, remembrance in all forms is an essential part.
Commemorations, memorials, monuments and consideration in school textbooks are further relevant steps.

What is needed to heal old wounds, as well as to restore and maintain justice and dignity, is best known and authoritative by those affected themselves.

The main obstacle is inherent in the human ego. His socialization with various beliefs makes it difficult for him to look at the subject holistically with a different perspective. Self-reflection and the acceptance of personal responsibility is generally a problematic issue that runs throughout society in individuals.

The fear of loss of prosperity is linked to the idea of limitless growth, which is fundamental to current economic systems. Peace, the environment and nature are not seen as a significant component of our prosperity in these systems. Systems seek self-preservation, so that a change of this aspect is usually only possible by drastic events from the outside.

From within the system, voluntary acceptance of responsibility for past wrongs is not to be expected.
A strong power imbalance is prevalent between victims and those responsible. Requests from victims are met with persistent resistance, which they are powerless to overcome. Higher authorities such as the UN and the International Court of Justice are not authorized or powerless.
Civil society plays an essential role with victims’ associations and peace initiatives. By example and influence, it fosters the critical mass to initiate systemic change.
The Working Papers of the Peace Institute Potsdam were created to provide support in this area.

Although in the long run this is an unavoidable necessary condition for the sustainable peace of the world community, a colonial amnesia and paralysis shrouded the Western industrialized countries.

Human lives, human suffering, environmental damage and massive waste of resources are the toll that the global community pays for this.

In spite of all knowledge about it, by means of excuses, relativizations, denials and legal tricks, the responsibility is delayed, but in the end not cancelled.

We use cookies on our website to give you the most relevant experience by remembering your preferences and repeat visits. By clicking “Accept”, you consent to the use of ALL the cookies.
Cookie settingsACCEPT
Manage consent

This website uses cookies to improve your experience while you navigate through the website. Out of these, the cookies that are categorized as necessary are stored on your browser as they are essential for the working of basic functionalities of the website. We also use third-party cookies that help us analyze and understand how you use this website. These cookies will be stored in your browser only with your consent. You also have the option to opt-out of these cookies. But opting out of some of these cookies may affect your browsing experience.
Necessary Always Enabled
Necessary cookies are absolutely essential for the website to function properly. These cookies ensure basic functionalities and security features of the website, anonymously.
Functional
Functional cookies help to perform certain functionalities like sharing the content of the website on social media platforms, collect feedbacks, and other third-party features.
Performance
Performance cookies are used to understand and analyze the key performance indexes of the website which helps in delivering a better user experience for the visitors.
Analytics
Analytical cookies are used to understand how visitors interact with the website. These cookies help provide information on metrics the number of visitors, bounce rate, traffic source, etc.
Advertisement
Advertisement cookies are used to provide visitors with relevant ads and marketing campaigns. These cookies track visitors across websites and collect information to provide customized ads.
Others
Other uncategorized cookies are those that are being analyzed and have not been classified into a category as yet.
SAVE & ACCEPT